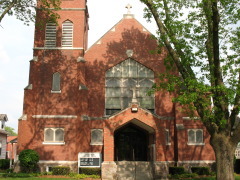 We hope your visit to our virtual space will lead you

to visit us in real time to celebrate at a Liturgy

or to attend a social or educational event.

Holy Communion under both species
on the last weekend of the month.

There are no upcoming scheduled events.

New parishioners are most welcome.

fill out and bring to the parish office.

Washington D.C., Jan 17, 2020 / 04:00 pm (CNA).- The Little Sisters of the Poor will have their case heard before the Supreme Court yet again in their years-long fight against the federal contraceptive mandate.

The Supreme Court announced on Friday that it would hear oral arguments in the case of the sisters against the State of Pennsylvania, which challenged the order’s exemption from the contraceptive mandate. Vatican City, Jan 17, 2020 / 03:00 pm (CNA).- Cardinal Robert Sarah has met with Pope Emeritus Benedict XVI to discuss the controversy following around their recently-published book "From the Depths of Our Hearts,” and insisted that there is no ill feeling between the two.

The book, presented as a co-authored work by the two, is subtitled “Priesthood, Celibacy, and the Crisis of the Catholic Church.” Pope Emeritus Benedict XVI’s contributions have been the subject of controversy since the book was announced on Sunday, and conflicting statements on the extent of the pope emeritus’s involvement in the project have been released over the last week. Beijing, China, Jan 17, 2020 / 02:00 pm (CNA).- Chinese officials have evicted members of the clergy, including a bishop, from their homes and are closing Catholic parishes in the Diocese of Fujian. While the officials cited “fire safety standards” as the reason for the evictions, all the clergy and churches affected have refused to join the Communist-controlled Chinese Patriotic Catholic Association.

The CPCA, the state-run Catholic Church, entered into an agreement with the Vatican in 2018, regularizing the status of its bishops. While the terms of the agreement have not been released, it has widely been reported that it gives the Communist party effective veto power over future episcopal appointments.